Tonight, I had the privilege of seeing one of my favorite authors, Michael Connelly, at a session where he and Robert Crais discussed the effect that Raymond Chandler had on their careers and on the crime fiction genre. It was a part of Santa Monica’s Citywide Reads 2012 program celebrating Chandler’s work. My sister, who introduced me to Michael Connelly in the first place, found out about it on his facebook fan page and came all the way out here to go with me.

They started off with a short back and forth time, chatting about how they each were influenced and what they thought of Chandler’s work. It quickly became evident that the two of them are good friends. Robert is the laid back, easy going one and Michael plays the straight man.

One interesting thing that came up was that Chandler is sometimes criticized for not having strong plots. Robert pointed out that he (Chandler) was more interested in how the scenes were received than the plot of the entire book. To reinforce this, he read a short excerpt where Philip Marlowe (Chandler’s protagonist), pours himself a drink and then looks out his window at the city of Los Angeles. It mentioned nothing about what was happening at that part of the book, but the description of Los Angeles and how individual perspective influences one’s perception of the city was captivating. Michael mentioned chapter thirteen of The Little Sister, where Marlowe drives around the city describing what he sees, as something he used to read before starting a new novel.

Following the chat was a question and answer period, but not before each one asked a trivia question about their work. I knew I had no chance with Robert’s question as I’ve only read one of his books, but I thought I had a chance with Michael’s. That is, until I heard it. He asked if anyone knew the intersection where Harry Bosch (his character) had met Elvis Cole (one of Robert’s characters) in the book Lost Light. I haven’t read that one yet, but when I do, I’ll be sure to look for the reference. 1

One of the questions was about the fact that both of the authors’ characters have homes on Woodrow Wilson Drive in the Hollywood Hills. Both found the ability to stand on a back patio and gaze at the city integral to their characters’ psyche. Michael said that he’d actually been sent up into the hills as a reporter to write about a murder and while he was waiting around, he wandered over to a burnt out cantilevered platform where he caught a view of the city. It was there that he decided to give Bosch a home in the hills. He also mentioned that, even after twenty years (his first novel came out in 1992), no one built a house at that address. 2

Another interesting question asked each author to name their favorite and least favorite book that they’d created. Robert replied that his favorite is usually the most recent one. When he starts a book, he loves it. By the time he finishes it, he hates it, but then a few months later he starts to love it again.3 Furthermore, there are things he likes about each book, so it’s hard to pick an overall favorite. Michael felt similar, and added that he likes his early books the least and has thought about what he would do differently if he were to rewrite them. I found this interesting because I just finished his first book and I rather enjoyed it.

After the Q&A session, they cleared off the stage and everyone lined up to walk up and get their books signed. We each picked up a book and patiently waited our turn. My sister was more nervous than I was initially, but as we drew closer I could definitely feel my anxiety increase. At these things, you have much more time to think about what you will say than time to actually say it. So, I carefully prepared a few sentences explaining how much I liked his work and that, even though I had purchased a book, I’d rather he sign my ticket, as I tend to give away or sell books after I read them. Then, suddenly I was next and I can’t even remember what I said, but I’m sure it wasn’t eloquent and it probably wasn’t even grammatically sound. He graciously signed my ticket after shaking my hand and then he signed my book too. He even let me get a picture with him. I know he puts his pants on one leg at a time, but it was still surreal to meet him in person. 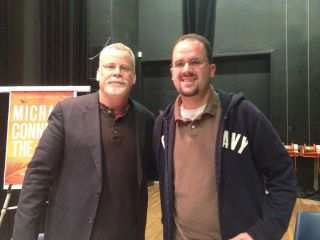 We then hopped into the line for Robert. This time, I was much more relaxed, probably because I have only read one of his books so far. It was fun to watch my sister get all starstruck, and it was great to meet him as well. Plus, he was nice enough to sign my ticket too. 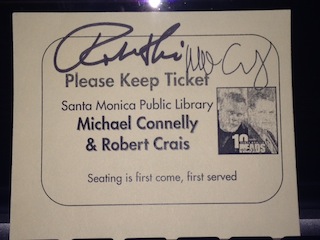 My sister and I share a love of reading, and tonight was a special night for both of us. I’m glad that I had the opportunity to attend tonight and I won’t soon forget it.

Oh, and one cool thing that I found out about Michael tonight: he’s left handed.