As evidenced by my runnerplus page, I’ve reached one of my goals for 2008: I ran 500 miles. It happened right after the last long training run before the marathon. I definitely didn’t expect to hit this milestone so soon in the year, but training for a marathon and logging more than 30 miles a week certainly got me there.

And speaking of the marathon, it was a lot of fun. We finished in 5:15:42, which is almost an hour and a half lower than my previous time. The weather definitely contributed to the better performance. The sun came out during the second half, but the ocean breeze kept temperatures down. Sara and I are already talking about doing it again next year.

One thing I noticed about training this time around is the sheer amount of energy and determination it takes to train. We started back in early January with little two or three mile loops and peaked in April with 147.4 total miles (almost 5 a day). May was particularly difficult because we started doing our weekday runs in the morning. It was great to run in the pre-dawn hours, but by 1 or 2 in the afternoon, our energy level was zilch. It was hard to concentrate at work and make it those last few hours. The weekend runs were almost a rite of passage. We’d get up as early as possible and then after two, three or four hours of running, we’d “lay low” the rest of the day. It was all we could do. Now that I look back on it, what really got us through was each other. It always seemed that when I didn’t want to run at all, Sara was right there encouraging me and when she couldn’t take another mile I was ready to go. I can remember toward the end of each successive long run cries of “you can do it” or “up and over” getting us through.

After all that, the marathon didn’t seem so daunting in the days leading up to June first. However, we certainly hit the wall at mile 19 or so. As we pushed through we noticed more and more the shirts of other runners with Bible verses written on the back. One that stuck out was Philippians 4:13. Sara kept saying it over and over again, and our strength returned as we came through the other side. By the time we saw our family again at mile 24 we were running strong and knew we could finish well. In all my life, I’ve never felt anything like turning that last corner and seeing the finish line. We kicked hard and ran past the crowd with our hands in the air. 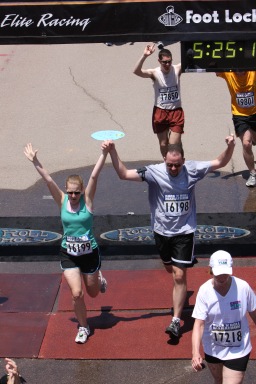 We’re planning on running two more events this year; the America’s Finest City Half Marathon and the San Jose Rock and Roll Half Marathon.

As far as mileage goes, I’m now up over 540 and who knows how far I’ll run by the end of the year.